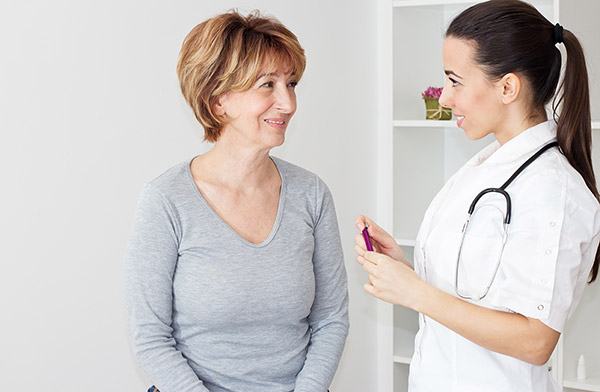 This pamphlet will explain:

Your doctor may use a laparoscope (left) to see your pelvic organs during a hysterectomy.

LAVH is a special form of hysterectomy—removal of the uterus. The uterus is a reproductive organ in the lower abdomen. It holds the fetus during pregnancy. When a woman is not pregnant, the uterus sheds its lining each month during her menstrual period.

LAVH involves the use of a small, telescope-like device called a laparoscope. The laparoscope is inserted into the abdomen through a small cut. It brings light into the abdomen so that your doctor can see inside. He or she views the pelvic organs on a special TV-like screen.

During laparoscopy, other small cuts are made in the abdomen. These allow your doctor to insert other devices to help move organs into view, perform parts of the surgery, and remove the uterus through the vagina.

The laparoscope also can be used before hysterectomy to look at the pelvic organs to help your doctor see what conditions are present. Then, he or she can decide whether the uterus can be removed through the vagina.

Hysterectomy may be offered as a treatment option for problems with the uterus. Following are reasons to perform LAVH:

You and your doctor will discuss whether LAVH is the best approach for you. If you have any questions about LAVH, ask your doctor.

Before LAVH, certain steps will be taken to prepare you for the procedure:

During LAVH, you will lie on your back as for a pelvic exam. The procedure most often follows these basic steps:

In some cases, an abdominal hysterectomy may be required if an LAVH could not be done.

There are some risks that may occur with any surgery. These may include:

LAVH can take longer than other types of hysterectomy. This means that you may need more anesthesia than you would with other forms of hysterectomy. Laparoscopy also increases the risk of damage to other organs, such as blood vessels, intestines, or the urinary tract.

Hysterectomy is major surgery, no matter how it is done. You will have some pain. You may need to stay in the hospital for a few days.

After you leave the hospital, you will need to rest and take care of yourself. Plan to take some time off from your job or your work at home.

Because of the stitches in your vagina, you will have some vaginal bleeding or discharge. You should not have sex for a few weeks after the surgery. Do not douche or put anything, such as a tampon, into your vagina during this time. Your doctor will tell you when healing is complete.

Make sure you know the warning signs of a problem. Contact your doctor if you have any of the following:

If you have problems with your uterus, you and your doctor may decide that a hysterectomy is the best treatment. LAVH may be an option. As with any surgery, it has benefits and risks. Talk to your doctor to help you decide if LAVH is right for you.

Fallopian Tubes: Tubes through which an egg travels from the ovary to the uterus.

Hysterectomy: Removal of the uterus.

Laparoscopy: A surgical procedure in which a slender, light-transmitting instrument, the laparoscope, is used to view the pelvic organs or perform surgery.

Ovaries: Two glands, located on either side of the uterus, that contain the eggs released at ovulation and that produce hormones.

Uterus: A muscular organ located in the female pelvis that contains and nourishes the developing fetus during pregnancy.

Vagina: A passageway surrounded by muscles leading from the uterus to the outside of the body, also known as the birth canal.